This Dating App, aLike, has the feature of matching people according to their common interests. It requires the user to answer questions about themselves and to choose four interests from a list and that creates an algorythm that matches people with their similar interests. Once the profile is created, the user has three options to find matches.

The audience is any man or woman in Canada over the age 18 that is looking for a relationship (Friends, Hook Ups, Short Term or Long Term).

In order to achieve a successful, effective and usable Sign Up Prototype for this dating app, a research was made on existing dating apps such as Tinder, Match.com, OKCupid and Skout.
Personally, I have been an active user of this kind of apps. I have used Tinder and OKCupid. Tinder being the one that I prefer. Only that Tinder doesn’t have a Sign Up process other than "Sign in with Facebook”, so for this research is not quite useful. I opened accounts in Match, OkCupid and Skout. Took some notes (attached in this file) to determine which files are most needed in a Sign Up Process for a Dating App.
Since I have had the chance to meet people through this app, I know what would I like to find or to fill up for my signing in process. To get some references about the labeling and organization of the fields to fill in, I used OKCupid. It has a pretty detailed sign up process. It asks several questions to fill in their algorithm. This can take a long time, but it is nice to have so many options and things to get to know about your future matches. Those options combined with the layout that Tinder uses, were the references for this prototype.
Match.com is even more complex in theirsign up process and for you to see your matches you have to pay. You go through a very specific set of questions to sign up. In the case of Skout, it is more simple, and I didn’t really like that app. It was too simple and other users can reach you regardless of how complete your profile is.
There are several dating apps in the market already and the element that makes aLike stand out is that they can swipe amongst people that share their same interests. This has to be made very clear and for the purposes of the research two types of cognitive walkthrough tests were created. 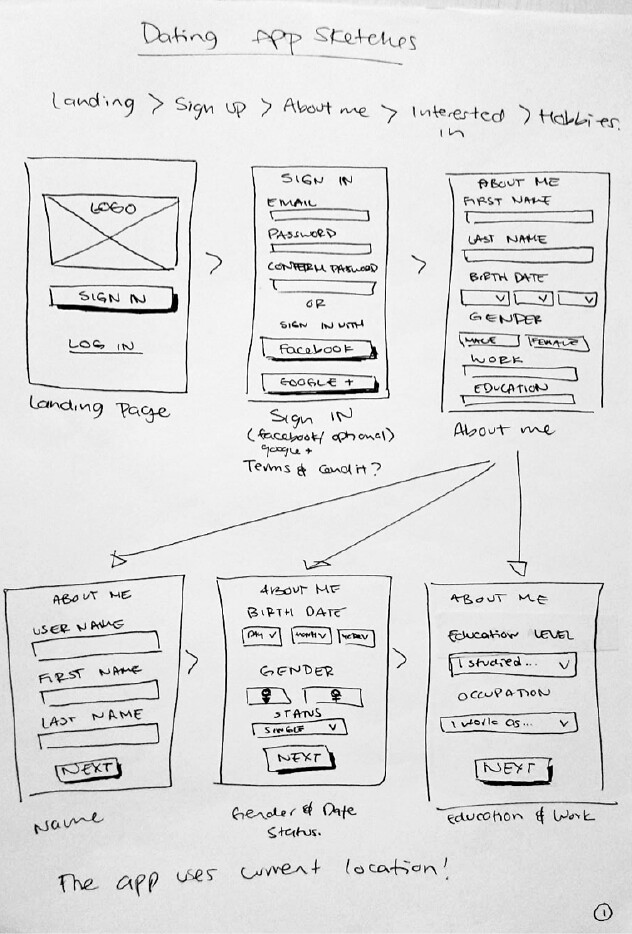 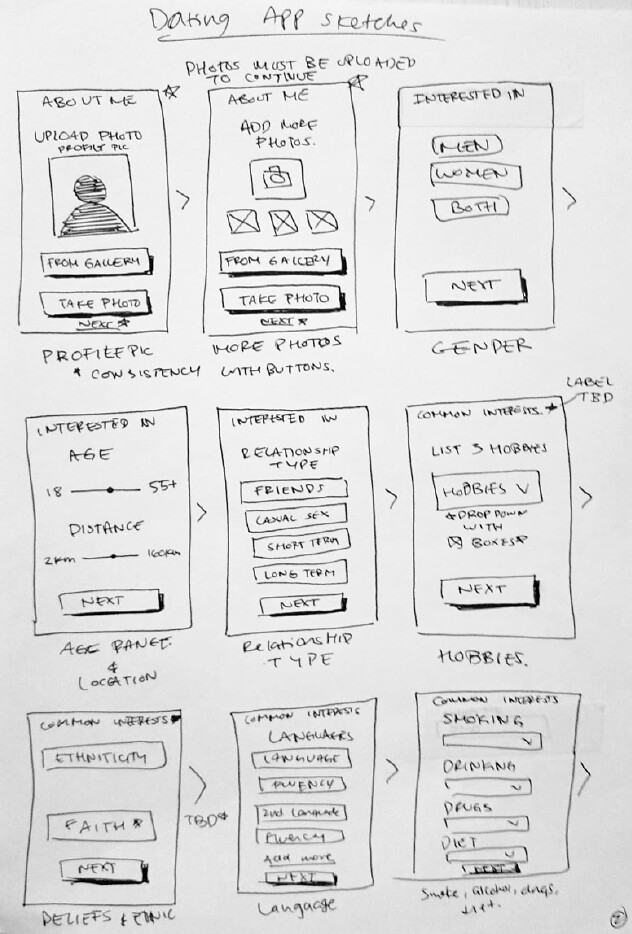 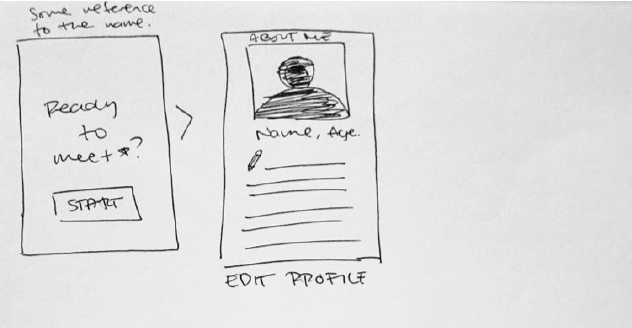 You are new to the online dating scene and you are ready to try it. You want to find a partner that likes to dance. Create an account. Now, find the right match that is within your age range, that lives close by and that is interested in dancing with you sometime.

Luana usually spends around 2 hours per day using her cellphone. Mostly to talk to her boyfriend, family and friends that are back in Brazil, where she is from. She has never used a dating app before. After explaining her how the test worked, she sat down and started. From start she was confused.
In the introduction, where the screen changes and it explains how the app works, she wouldn’t know how to get started. I had to tell her to press Sign Up, and since that she saw everything more intuitively. She had some concerns about the Background questions during the Sign Up. She told me that she wasn’t sure that it was a good idea to have those kinds of questions without the possibility of hiding their answers (For Ethnicity and Faith, specifically).
She enjoyed creating her account but she wanted to see more interests too. When she was finding men, she found one man that liked dancing quickly, because she selected that category for herself. Overall, she requested the website to be less forward with the questions and to add the option of “No Answer” for all of the questions.

You are new to the online dating scene and you are ready to try it. You want to find a hiking partner for the summer. Create an account. Now, find the right match that is within your age range, that lives close by and that is outdoorsy and wants to go out on hikes with you.

Joseph usually spends around 1 hour per day using her cellphone. He has used a dating app before. After explaining him how the prototype worked, he sat down and started. I told him to give me his email address and a possible username before the test so that I could have the tags ready for him. I also explained the task scenario to him before the video, so that he felt less intimidated by being filmed and in the video, I mention it later on.
During the creation of the account, in the Interested In section where he had to choose the range of age, he noticed that I need two sliders to determine a range, instead of a specific age. I also asked him about his interests ahead of time to add it to the prototype. For the matches, he wanted to see the pictures to get larger. He didn’t think that the “Know more about” button was not intuitive. He didn’t recognize the button, I had to let him know where that button was. He wants to be able to know more information about the match before liking or passing. He would get rid of some of the introductory questions during the creation of the account.

Watch the video for this paper prototype test

Jarrett usually spends around 2 hours per day using his cellphone. He has used a dating app before. After explaining him how the prototype worked, he sat down and started.
He didn’t wait to see the whole explanation for the app and he wanted to create an account using Facebook. I didn’t have those slides for him. He didn’t like the questions for Background and he stated that he prefers to have the option to Skip.
He would respond to those later on. He didn’t write a description either, he just wanted to fill that information later. He had trouble when he started matching, right after creating his profile. He wasn’t sure where to click and he didn’t know if his profile was created. He doesn’t like that the app tells him the directions on swiping and passing.

Patrick usually spends two to three hours a day using is cellphone. He has experience using dating apps before. After I explained him how the User prototype tests work, he tried the application and got started. In the introduction, he didn’t see the description of what the app does, so that gives the feedback of highlighting the features of aLike more so that the users do watch it and understand it. He went through all of the Sign Up questions and he was surprised by the “Relationship Type” section, but he mentioned that he was not offended by it. It was just unexpected. For the “Habits” section in the “Diet” part he was expecting that to define the Body Type. That can be solved by displaying the dropdown for the next prototype. He did not understand the special feature of aLike. He was not able to get it, so before getting in to the graphics, that must be fixed.


Watch the video for this online medium fidelity prototype test

Paula usually spends one or two hours using her cellphone every day. She has never used a dating app, but just by reading the name of it she asumed that it was an app that matches you with people that share your interests. While she was signing in she made me realize that the “Sign up” does not include a Username option. And she mentioned that she would like to have the option of loging in without having to fill up her profile. While she was navigating through the “Habits” option, she mentioned that she would expect the algorythm to identify if the possible match will have similar answers as you. For example, it would exclude smokers if you dont smoke, etc. She mentioned that given to the name aLike she understood that she has to choose interests and she recommended that the range of interests must be very good and extense so that everyone feels included. She was able to realize that aLike makes you a match that includes the four interests you have. Her task was completed successfully.

Thomas usually spends three to four hours using apps in his cellphone. He has used different dating apps before and he has a background in Communications. He started the prototype test and he immediately suggested to consider the spacing for the ad space. When he got to the “Interested in” section he mentioned that he does not like the option of “Men” “Women” and “Both”. He suggested to have a check box to choose one or the other or both. He also suggested to use a slider that goes from “Men” to “Women” because there are people that are most inclined to a gender preference in a percentage form. He mentioned that the section for “Relationship Type” was very specific and people never admit that. He mentioned that the concept is terrible. He likes the idea of including “Hookups”, but not friends because people don’t go to dating apps to make friendships. He also suggested to blend together short term and long term and change it to “Dating”. So he suggests, “Hookups” and “Dating”. He does not like the “Habits” section, he believes that people will lie about it. For the “Write about you” section he suggested that there are many narcissists out there and they usually need more than 500 characters to write about themselves.
He was able to find a person that had the same interests than him because the prototype did not show up someone different, but he didn’t get there by using the aLike option. This is pointing out the importance of explaning the concept of aLike.

The latest user tests were very helpful to realize that the explanation for the aLike concept is not too clear yet and it needs to be developed. The labels in the sections are clear and the sign up process is quite logical, but some sections of it might need to be reviewed still.
The main focus before going into UI, will be to fully explain the aLike Concept.

Check out the digital prototype here